Other reliable DCOF slip tests exist besides the pendulum DCOF test, although the pendulum is the most widely used and accepted around the world, and the other DCOF testers have a much more limited use.

The BOT-3000E digital tribometer was used for previous test standards ANSI B101.1, B101.3, and A137.1. The test method used now is ANSI A326.3, as the others have now expired. The BOT-3000E tests floors using hard rubber sliders of Neolite for static coefficient of friction (SCOF) testing (reliable for dry testing only) and SBR for dynamic coefficient of friction (DCOF) testing. ANSI A326.3 states, “The coefficient of friction (COF) measurement provided in this standard is an evaluation of hard surface flooring materials under known conditions using a standardized sensor material prepared according to a specific protocol. As such it can provide a useful comparison of surfaces, but does not predict the likelihood a person will or will not slip on a hard surface flooring material.” Therefore, this test must never be used to assess safety or real-world slip resistance. The values given in the test method are “generally accepted minimums”, not values above which are considered safe. If you want to assess safety, you’ll need a pendulum DCOF slip resistance test.

Static friction is applicable to a pedestrian who is standing still on a floor. A floor that is slip resistant will be non-slip for someone who is in motion across the floor. Static coefficient of friction slip testing has therefore been proven to be irrelevant, especially in the wet condition. Anyone who has ever, or continues to sell static coefficient of friction (SCOF) testing as a valid way of assessing the actual slip resistance of a wet floor is either profoundly incompetent in the field of floor slip resistance testing, or they have been or are presently purposefully misleading their clients for a quick buck. Both the BOT-3000E and the Tortus (see below) are capable of making a lot more slip tests than the British pendulum tester per hour, which makes those instruments valuable for making lots of tests on a large floor fairly quickly to see if slip resistance varies in different areas of the floor. 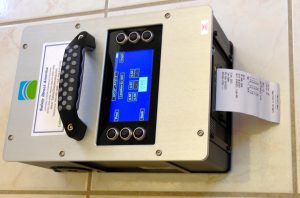 The Tortus digital slip tester (tribometer) has been endorsed by the Ceramic Tile Institute of America (CTIOA) since 2001 as a secondary standard, with the pendulum test being the primary standard test device for assessing real-world floor slip resistance, or coefficient of friction (COF). One advantage of the Tortus over the pendulum is that it can perform many slip tests in a short period of time, dry and wet. The CTIOA method as well as the Australian standard AS4586-2013 have endorsed a minimum dynamic coefficient of friction for level floors of 0.50 using the Tortus slip resistance test using hard FourS (standard shoe sole simulating) rubber. Here you can find a Tortus video demonstration.

The safety criterion of 0.50 applies only to the Tortus tribometer, not to all tribometers. It is generally recommended that one get a minimum PTV of 36 for “low slip potential” using the pendulum DCOF test. The BOT-3000E uses the DCOF of 0.42 as their absolute minimum to achieve some sort of slip resistance (and that’s usually setting a very low bar, in most cases.) Every slip resistance tester, or tribometer, will have its own safety criterion based on research. Anyone who says there is some “universal” DCOF number that signifies a safe floor is someone who either cannot be trusted, or is someone who does not understand how science works.

See the DCOF floor slip resistance testers in action in this video: