Here’s a video explaining how ASTM E303 has been updated to more closely resemble other British Pendulum test methods from around the world, and showing the pendulum testing the slip resistance of a floor:

The most useful slip resistance safety standards and test method in use today utilizing the pendulum slip test device (or pendulum skid tester) is Australian Standard HB198, or AS 4586 and AS 4663. These standards include situation-specific safety standards for Pendulum Test Value (PTV), or BPN (British Pendulum Number) for more than 27 different flooring situations. The standard recommends minimum wet PTV’s ranging from 12 (for dry areas) to 55 (swimming pool ramps and stairs leading to water.) Now that ASTM E303-22 closely mirrors the test method used in Australia, across Europe, the United Kingdom, and other countries on five continents, we can now reliably use the safety criteria that has been assembled by the 50 years of international research using the pendulum DCOF tester that was included in HB198 and the United Kingdom Slip Resistance Group’s recommendations that were assembled with the Health and Safety Executive (HSE) in the UK.

The pendulum DCOF test is designed to replicate the heel strike of a pedestrian, which is where most slips occur. A fluid film is created between the heel of a shoe and a wet floor causing a hydroplane slip, and this test method generates a similar fluid film and is therefore very accurate in assessing pedestrian slip risk. Fifty years of research into actual slip and fall incidents around the world makes this tribometer easily the most widely trusted and internationally-accepted in the world today. The pendulum is also effective in testing in the dry condition and using dry contaminants such as drywall dust. Oil and other wet contaminants can also be used. The pendulum DCOF tester is therefore the best way to assess any type of flooring for slip resistance in situations such as for ADA slip resistance requirements, OSHA slip resistance guidelines, and to avoid slip and fall accidents on properties for responsible parties such as architects, flooring specifiers, insurance companies, and building owners. 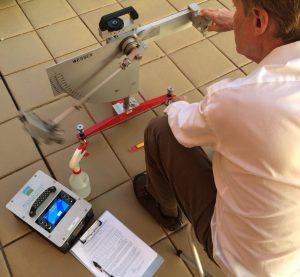 The pendulum slip resistance test is well-researched and long backed by the ASTM (American Society for Testing and Materials) standard ASTM E303-93 that was validated and has been in use since 1993, which is about thirty years ago now. 3500 test results on walking surfaces were obtained over more than 25 years to validate this test method back in the 1970s in the United Kingdom. The pendulum also received the highest rating for correlation with human traction in a peer-reviewed published scientific study of 11 types of floor friction meters by the University of Southern California (USC) Medical Center in the United States in 2010.


The Australian AS 4586, United Kingdom’s/Europe’s BS EN 16165, and America’s ASTM E303-22 test methods for pedestrian floor slip resistance testing are now all very similar, and they therefore produce very similar results on identical surfaces. Data on precision and bias relevant to human traction are available for all methods. A precision statement is included in the ASTM E303-93 test method, and several other precision studies have been conducted over the past several decades in the UK, South Korea, China, Europe, and elsewhere around the world.

The safety criterion specified in research conducted with the pendulum slip tester has become a standard in the United Kingdom, Australia, Dubai, Malta, New Zealand, Singapore, Spain, and other countries that follow British law, and has been in use continuously, with the same numerical safety criteria, since 1971. The Health and Safety Executive (HSE) in the United Kingdom, along with the United Kingdom Slip Resistance Group (UKSRG) many years ago decided, after reviewing decades of research that level flooring with a PTV below 25 have a “high slip risk”. Level floors with a PTV, or BPN, between 25 and 35 have “moderate slip risk”, and level floors with a PTV above 36 have a “low slip risk”.

Percy A. Sigler at the U.S. National Bureau of Standards developed the pendulum method for assessment of pedestrian traction potential, publishing his results in 1948. Minor adjustments to ASTM E 303 and safety standards for pedestrian traction are specified by the United Kingdom Slip Resistance Group in their 2011 publication “The Assessment of Floor Slip Resistance: The UK Slip Resistance Group Guidelines (Issue 4)”. This group (ukslipresistance.org.uk) has members in the UK, USA, and Australia who contributed to the fine-tuning of the guidelines based on vast experience with this floor slip test DCOF method.

The pendulum DCOF test method and its safety standard have international acceptance in courts of law. Although other slip test devices have been used in courts, the pendulum has much more extensive and internationally-accepted research backing its validity, precision, and repeatability. Simply put, the pendulum slip test is the most researched and most useful slip resistance test available in the world today, especially with its situation-specific recommendations. Obviously, a pool deck would require more wet slip resistance than a lobby, and the pendulum test is the only slip test that takes this into account.

ANSI A326.3 is another American test standard, but it states, “The coefficient of friction (COF) measurement provided in this standard is an evaluation of hard surface flooring materials under known conditions using a standardized sensor material prepared according to a specific protocol. As such it can provide a useful comparison of surfaces, but does not predict the likelihood a person will or will not slip on a hard surface flooring material.” It should therefore never be used to assess safety or real-world slip risk.